Wearing out your Bible 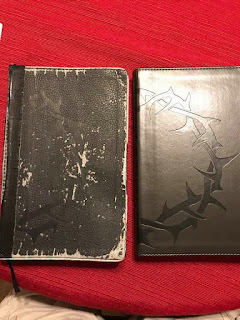 So I got a new Bible from my wife for our 27th anniversary last week! Yes, she’s something of a saint for sticking with me all this time! Definitely my “good thing” from the Lord (Proverbs 18:22), a gift of God’s grace.

Do you know how hard it is to give up an old Bible? I’ve had this one since December, 2008, and have used it practically every day for almost 12 years now. There’s duct tape holding the outside cover together and packing tape on the inside. Its features include yellowed edges from fingerprints, a couple of coffee stains, underlined verses, and even faded maps.

Old Bibles are the best. The one I had before this was a Promise Keepers NIV Men’s Study Bible. That one was a Christmas gift from Amy in 1997. Nearly 1,600 pages of Scripture and study notes highlighting the godly character required of men. Remember Promise Keepers?

Here are the seven promises of a Promise Keeper, which are probably more relevant now than in the heyday of the big stadium PK events of the 1990’s:

Promise One: A Promise Keeper is committed to honor Jesus Christ through worship, prayer and obedience to God’s Word in the power of the Holy Spirit.

Promise Two: A Promise Keeper is committed to pursue vital relationships with a few other men, understanding that he needs brothers to help him keep his promises.

Promise Four: A Promise Keeper is committed to building strong marriages and families through love, protection and Biblical values.

Promise Five: A Promise Keeper is committed to support the mission of the church by honoring and praying for his pastor, and by actively giving his times and resources.

Promise Six: A Promise Keeper is committed to reach beyond any racial and denominational barriers to demonstrate the power of biblical unity.

Promise Seven: A Promise Keeper is committed to influence his world, being obedient to the Great Commandment and the Great Commission.

That’s the kind of men we need in our world today! Let’s rise up, men, and live bold, faithful, purposeful lives that impact our homes, churches, communities, and nation for the Kingdom of God. Let’s forge a clear path for others to follow, especially our sons and daughters. Let’s refuse to compromise with worldly ways, and let’s reject passivity by accepting responsibility to lead, serve, and influence this world for good.

Start today by getting out your Bible and hearing what God has to say to you. The single most influential way to grow in your faith is the consistent intake of God’s Word.

Wear your Bible out. Make notes in the margin when God says something you need to hear. Underline key verses that help guide your steps. Read it. Study it. Meditate on it. Pray through it. Memorize it. And most of all, do what it says. You’ll be well on your way to being a godly man.

Posted by Rob Gallion at 2:00 PM No comments:

Hypocrisy at its worst 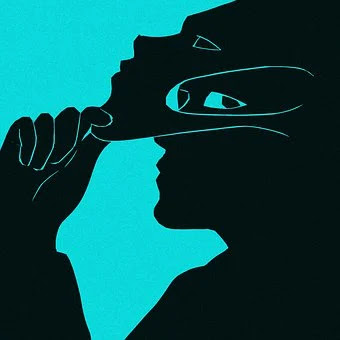 Double standards, different sets of rules, contradictions – is it any wonder why the public doesn’t have much confidence in the recommendations for mitigating the virus, when large gathering of protesters and rioters fill the streets with the praise of the talking heads, but you can’t have youth baseball practice anymore? When funerals for George Floyd and John Lewis draw hundreds or thousands, but you can’t have more than 50 people when your loved one dies?

I could go on for a while. When climate change protesters leave streets littered. When BLM activists rage against the few legitimate cases of police brutality but ignore the overwhelmingly greater issues of black-on-black violence, fatherless homes, and rampant drug and alcohol abuse. When the experts and politicians claim to be following the science and the data to save lives but can’t see the plain biology showing that life begins at conception and continue to promote taking lives.

But even worse, when those who say they belong to Jesus live like the devil, the impact on an unbelieving world can have dire and eternal consequences. Christian, I urge you to live by faith as a witness to the world!

Hypocrisy may be one of the most cited reasons why people don’t attend church. They know that professing Christians ought to be living to a different standard than non-believers. That’s very true. They should be.

Those who claim to know Jesus should be marked by attitudes of compassion, humility, gratitude, joy, peace, and so on. They should display gentleness, kindness, self-control, mercy, forgiveness, patience, etc. And they should be men and women who pursue righteousness and holiness and purity in every way, while renouncing ungodly and worldly passions.

If your primary excuse for not seeking after Jesus or the fellowship of His church focuses on the hypocrisy of self-identified Christians, first of all I’m glad that you see that there is indeed an expectation that Christ-followers should obey the truth of God’s Word.

And I’m sorry that the reality of our lives doesn’t always align with the righteousness of Christ Jesus. We all still stumble along the way. We wrestle with the old habits and lose. We still fall for Satan’s lies and foolishly indulge the desires of the flesh. At least sometimes.

Christians are a work-in-progress. We are in the process of being transformed into the likeness of Jesus, but the construction is often slow and imperfect.

But let me urge you to keep your eyes on Jesus and not on the hypocrites. Listen, we know we’re imperfect. That’s why we know we need Him more than anything! We need His forgiveness. We need His guidance. We need His strength. We need His help.

And you know you do, too. “But God demonstrates His own love in that while we were yet sinners, Christ died for us” (Romans 5:8). That’s an incredible kind of love that offers forgiveness and cleansing from sin. And the offer stands for you to receive salvation today.

Excuses won’t work on judgment day. Look to Jesus, the perfect and sinless Son of God, and believe in Him for everlasting life.

Posted by Rob Gallion at 5:02 PM No comments: